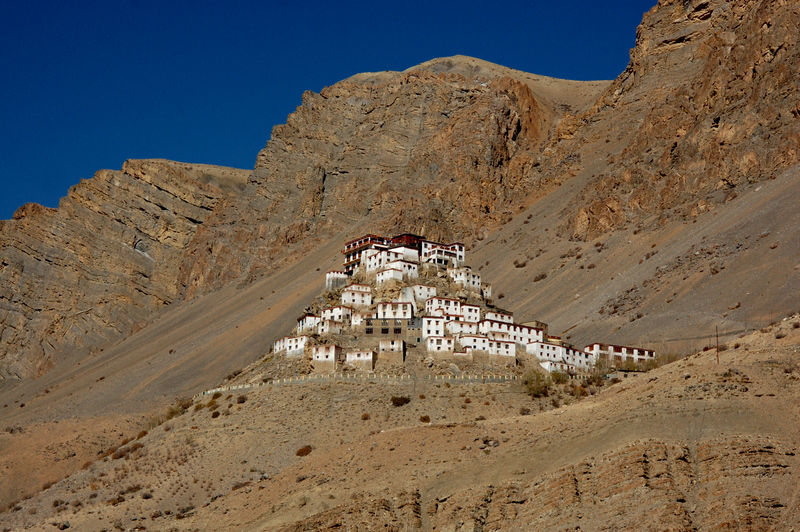 Posted by Sriram (Chennai, India) on 1 November 2009 in Landscape & Rural and Portfolio.

30 minutes from Kaza is this beautiful Monastery called "Ki". Here is more about this place... Ki Monastery is the oldest and the biggest monastery of Spiti dominating Ki-Village. About 300 lamas are receiving their religious training in its monastery, which houses rare paintings and beautiful scriptures of Buddha and other gods and goddesses. It is serving western population of Spiti. It is regarded as the largest in the sub-division. It is a collection of rooms and a labyrinth of corridors that do not follow any defined plan, but seem to have grown over the years. No definite data can be ascribed to the construction of the gompa - that acted both as a monastery and as a fort. In the architectural definitions given to various monasteries, Ki falls in the 'Pasada' style which is characterised by more stories than one and often plays the role of a fort-monastery. Ki is the repository of the rare 'Thangka' paintings and several ancient musical instruments - trumpets, cymbals and drums. Its library holds the manuscripts of the sacred Tangyur texts. Apart from the cells pccupied by the monks, the monastery has a large 'Du-Khang', assembly chamber lined by religious paintings and other chambers of the incarnate abbot, the zim-chung is the highest point in the building. The village of Ki is just short of the monastery.

Spotlight feature for the 85th time and color spotlight for the 37th time - 122 times featured in total. Totally humbled and motivated to do better. Not a day goes without Aminus3 in it. Thanks Aminus3 community for such kindness. :)

This take could well be in a travel magazine, excellent Sriram.

Thanks for sharing the informations and for the good snap

Very beautifull image, and yes, a great socio-arquitectural story. The mountain seem to be protecting the monastery/fort. Good light to.

shoti from Everywhere in the, Philippines

what a lovely scene. I already feel spiritual just by looking at it :)

Superb this monastery sheltered by the mountains, I guess the winter!

fantastic !!! a beautiful village ,great point of view !for this monastery !!
friendships !

beautiful shot here my friend. and a beautiful scene you've captured. somehow, your choice of composing it in a way that you put the temple in the middle gives me a meaning of centering my god above everything else, even if other things appear to be bigger than it (even if it was as high as the cliffs).

Lovely how the village/monastery reflects the shape of the mountains

wow! what an impressive thing!

amazing sky and beautiful frame of monastery. Its amazing to see few areas that are least polluted, both in the sense of material and mind. Nice series and thank you for sharing.

What a remote location. Stunning view!

Brings back so many memories. Nice shot...

It is a rare caption of ki village. beautiful view and the informations are very interesting and worth sharing. when opportunity comes, we will visit alongwith you.

wow.. this is BRILLIANT !

Thank you so much for the photo and the explanations...
It is a fantastic place to see... I wish I could see that !

An awesome setting and an awesome monastery. Excellent image.

Thank you for the information and the photo!