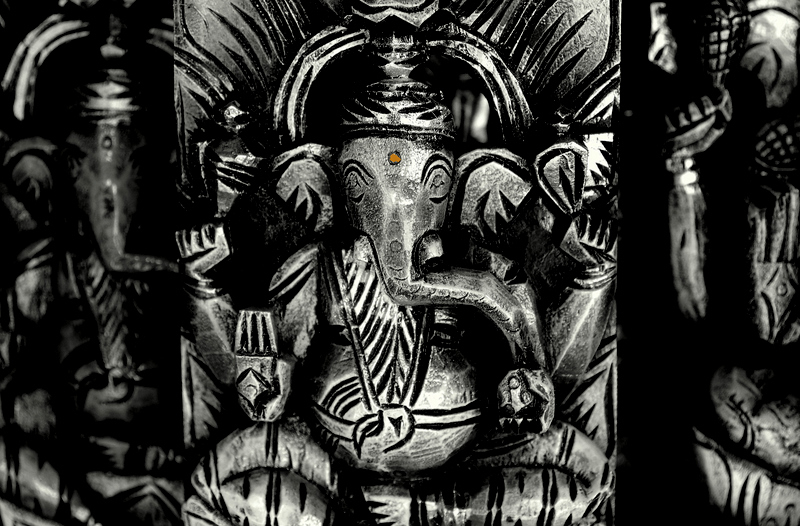 The Lord of Beginnings

Posted by Sriram (Chennai, India) on 25 January 2010 in Lifestyle & Culture and Portfolio.

Ganesha is one of the best-known and most widely worshipped deities in the Hindu pantheon.
Ganesha has been represented with the head of an elephant since the early stages of his appearance in Indian art. Puranic myths provide many explanations for how he got his elephant head. One of his popular forms, Heramba-Ganapati, has five elephant heads, and other less-common variations in the number of heads are known. While some texts say that Ganesha was born with an elephant head, in most stories he acquires the head later. The most recurrent motif in these stories is that Ganesha was born with a human head and body and that Shiva beheaded him when Ganesha came between Shiva and Parvati. Shiva then replaced Ganesha's original head with that of an elephant. Details of the battle and where the replacement head came from vary according to different sources. In another story, when Ganesha was born, his mother, Parvati, showed off her new baby to the other gods. Unfortunately, the god Shani (Saturn), who is said to have the evil eye, looked at him, causing the baby's head to be burned to ashes. The god Vishnu came to the rescue and replaced the missing head with that of an elephant. Another story says that Ganesha was created directly by Shiva's laughter. Because Shiva considered Ganesha too alluring, he gave him the head of an elephant and a protruding belly.
According to Indian History, Ganesha emerged a distinct deity in clearly recognizable form in the 4th and 5th centuries CE, during the Gupta Period, although he inherited traits from Vedic and pre-Vedic precursors. His popularity rose quickly, and he was formally included among the five primary deities of Smartism (a Hindu denomination) in the 9th century. A sect of devotees called the Ganapatya, (Sanskrit: गाणपत्य; gāṇapatya), who identified Ganesha as the supreme deity, arose during this period. The principal scriptures dedicated to Ganesha are the Ganesha Purana, the Mudgala Purana, and the Ganapati Atharvashirsa.
- With inputs from Wiki

Spotlight feature for the 82nd time and color spotlight for the 37th time - 119 times featured in total. Totally humbled and motivated to do better. Not a day goes without Aminus3 in it. Thanks Aminus3 community for such kindness. :)

I like the triptych and the information shared. I have a small Ganesha on a pendant.

The Ganesha figure always makes me happy for some reason. I have a small collection at home. This would look great framed among them :)

great image!....makes me remember a movie I've seen long time ago called The Maharabata (not sure this correctly written) wich I liked a lot...